“I have watched,” Condoleezza Rice says in the opening pages of her important new book, “as people in Africa, Asia and Latin America have insisted on freedom. … As a child, I was a part of another great awakening: the second founding of America, as the civil rights movement unfolded in my hometown of Birmingham, Ala., and finally expanded the meaning of ‘We the people’ to encompass people like me. … There is no more thrilling moment than when people finally seize their rights and their liberty.” Such a vision, Rice argues in “Democracy: Stories From the Long Road to Freedom,” is what should shape the mission of American foreign policy in the 21st century. This view, more widely held in the Democratic than in the Republican Party, has been eclipsed in recent years by disappointments in countries ranging from Ukraine and Rwanda to Egypt and Turkey, but Rice is a keeper of the flame. Her faith in the benefits and strategic importance of democracy promotion is as strong as, or stronger than, it was when she joined the George W. Bush administration in 2001.

Rice’s continuing defense of the democracy agenda will be much noted among Republicans seeking to come to terms with the implications of President Trump’s “America First” approach to the world. She is one of the country’s most distinguished and widely respected diplomats. As hard-line advisers like Vice President Dick Cheney and Secretary of Defense Donald Rumsfeld lost influence with President Bush in the years following the 2003 invasion of Iraq, Rice as secretary of state in the second Bush term emerged as the single most influential voice shaping foreign policy. Trained as a Russia specialist, she got her first real experience in government as part of President George H. W. Bush’s team, which helped bring the Cold War to an end. 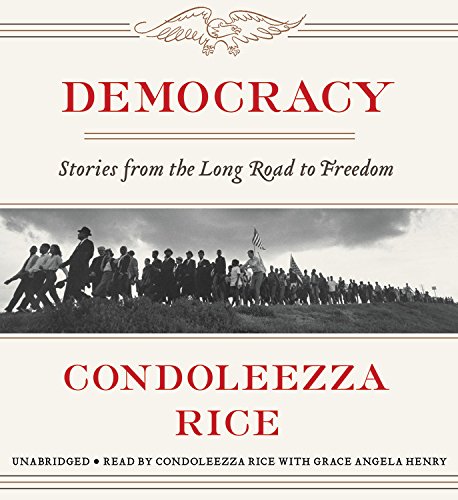 The decisions made in those years would shape American policy for the next generation. With the Soviet Union out of the picture, the United States did not withdraw from the wider world. Instead, it doubled down on a policy of global engagement, seeking to build what some in the first Bush administration called a “new world order,” based on the global extension of democracy and liberal capitalism. Despite their differences, the next three presidents, Bill Clinton, George W. Bush and Barack Obama, worked within this overall framework; only with the inauguration of Donald Trump would the United States have a president who challenged this bipartisan perspective.

This early in the Trump administration, we cannot predict whether or how the president will convert his campaign rhetoric about “America First” into a foreign policy that challenges or reshapes America’s post-Cold War foreign policy. What we do know, however, is that the ambitious, wide-ranging goals of the world-order project have never been as popular with voters as they were with the foreign policy and journalistic elites. Since 1992, when voters rejected George H. W. Bush for Clinton, who was critical of Nafta and free trade with China on the stump, through 2016, when Trump defeated Hillary Clinton, the less globalist candidate has won the key presidential elections. George W. Bush ran in favor of a “humbler” foreign policy and attacked “nation-building” against the global agenda of Vice President Al Gore. Obama was seen as promoting a less assertive and less expensive foreign policy in 2008 than John McCain, and in 2012, the Obama team mocked Mitt Romney’s warnings that Vladimir Putin was America’s leading geopolitical foe.

The results of the 2016 election make democracy promotion perhaps the most endangered element of the “new world order” agenda. Free trade has powerful defenders in the corporate world; democracy promotion is strongly supported by nongovernmental organizations — some of which, like the National Endowment for Democracy, receive government funds that could be at risk. “Democracy” is Rice’s attempt to hammer home the idea of democracy promotion as a key goal for American foreign policy. This heartfelt and at times very moving book shows why democracy proponents are so committed to their work, but also indicates why so many others are skeptical.

Rice is above all an honest and sincere writer; she does not gild the lilies or tweak her data. She is candid about times that democracy promotion has led to costly mistakes, singling out the 2006 elections that she and her team pushed the Palestinians to conduct and the Israelis to support, confident that Hamas would lose. Hamas won, and the subsequent deadlock and war among Palestinians continues to complicate the task of Middle East peacemaking to this day. She is forthright about mistakes made in Iraq, and notes that disasters like the mistreatment of prisoners at Abu Ghraib and American stumbles in post invasion Iraq complicated the Bush administration’s goals of promoting democracy elsewhere. She is also honest about the failures of the much ballyhooed Orange Revolution in Ukraine, and about the infighting and corruption that would ultimately lead to yet another Ukrainian revolution in 2014. Setbacks in Egypt and Turkey, and the failure in Libya to build any kind of government after the overthrow of Qaddafi, also get mentioned.

Yet for Rice, the point of these failures is that democracy promotion is “hard — really, really hard,” not that it is unimportant or impossible. It remains, she insists, both an inescapable moral responsibility for the United States and the only policy that, long-term, has the potential to safeguard American security. And the agenda, she points out, has had successes as well as setbacks. “Elections,” she reminds us, “still attract long lines of first-time voters, even among the poorest and least-educated populations in Africa.” She balances her reports on places where democracy, at least for now, has failed to take root, with stories of the difficult, often partial, but historically important victories that democracy continues to win. In Colombia, Kenya, Tunisia and Ghana she finds signs of hope.

The strength of local institutions can, Rice argues, make the difference in building democracy. The police, the judiciary, a free press, political parties: When these institutions are strong, young democracies can put down roots and grow.

But foreign support can also help. Rice cites the Millennium Challenge Corporation compacts that the second Bush administration introduced, providing substantial support for countries that commit to clear governance reforms. In Liberia, where M.C.C. compacts helped the democratic government of Ellen Johnson Sirleaf introduce significant improvements, the new capacity proved instrumental in the fight against the Ebola outbreak of 2014.

Rice’s description of progress, often against considerable odds and usually only partial, is inspiring, but a political question remains: Is there enough support in American politics for a democracy-building agenda to keep the Trump administration and its successors in the fight?

The answer must be mixed. There are areas where democracy-promotion efforts touch directly on important American interests so that even the most hard-nosed practitioners of “America First” realpolitik are likely to see an advantage. In Nigeria, for example, the state’s capacity to fight terrorism is closely linked to its overall capacity to govern. But where such a clear and direct connection to an obvious national security challenge is lacking, these policies may be harder to defend as American voters reassess their commitment to the global agenda that the first President Bush laid out so many years ago. One must hope that those who engage in the debates about to take place will think carefully about the ideas and the examples Rice describes. Both supporters and skeptics of democracy promotion will come away from this book wiser and better informed.