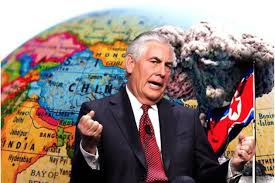 For all the tough talk about going it alone if China is ‘not going to solve the problem’, Trump’s approach to North Korea is remarkably similar to every other US administration’s strategy since North Korea acquired nuclear weapons. All options have always been on the table, Trump has just been blunter about it. The dilemma the international community faces is that all options are costly.

North Korea’s weapons of mass destruction (WMD) program may be the most dangerous threat in international relations today. Since 9/11, fear of terrorist groups seeking to obtain nuclear weapons has been an ever-present concern. But North Korea is a belligerent state that already has them, posing an immediate threat of use and proliferation.

Pyongyang has shown a flagrant willingness to break international law, attack its neighbours, kidnap foreign civilians, carry out assassinations in foreign territories and threaten superpowers. Yet the international community has settled for maintaining the status quo as it has convinced itself that this is the least costly of options. Millions of North Koreans have paid for this decision with their human rights and lives.

Regional stakeholders so far have pursued two direct non-military strategies: talks and sanctions, neither of which have curtailed the WMD program or improved human rights in North Korea. Indirect approaches such as international ‘naming and shaming’ and isolation have also not had an impact.

The Six-Party Talks, first held in 2003 and discontinued in 2009 after six rounds, failed to provide a peaceful resolution to the North Korean nuclear puzzle. Renewal of talks is highly unlikely as the Trump administration has stated it is unwilling to pursue ‘20 years of a failed approach’ and North Korea seeks only bilateral talks without any preconditions. Adding to this, the current geopolitical context is not conducive to cooperation as the US–China rivalry has intensified and US–Russia relations are being scrutinised given the current FBI investigation into Russian involvement in the 2016 US presidential election.

South Korea is undergoing a leadership transition and its North Korea policy is uncertain, so it is unlikely to take the lead. Even Japan, whose Prime Minister Shinzo Abe has shown a willingness to negotiate with almost anybody and has held negotiations with North Korea on the abduction issue, is an unlikely partner. The missile test during Abe’s February US visit and subsequent united declarations that North Korea is a ’serious threat’ leaves Abe little room to pursue talks.

The Trump administration has floated the idea of tightening the screws on North Korea through additional sanctions to go along with existing ones imposed by the United States and the UN. Sanctions can be effective for sowing discontent among elites, as they may limit their ability to transfer money and travel. But sanctions are notoriously ineffective and disproportionately harm the civilians, who are themselves victims of the authoritarian regime.

Trump would have to take a tough stance on China to fulfill his threat of wider sanctions ‘aimed at cutting North Korea off from the global financial system’ with a focus on Chinese banks. It is unlikely to eventuate given that he backed down from his One-China policy posturing. An antagonistic approach to China would also risk greater regional instability if it escalates into a trade war or affects other contentious issues.

On the other hand, 64 per cent of Americans would support the United States using military force to defend its Asian allies in the event of a serious conflict with North Korea. The United States could pursue a limited path of pre-emptive strikes targeting WMD facilities, or a more ambitious one, such as war to overthrow the Kim regime.

The less costly option of a pre-emptive strike still would not guarantee any success as it would be difficult to take out all the North Korean weapons facilities. The United States has limited knowledge of the current WMD program and facilities as there have not been inspectors in North Korea for almost a decade. A pre-emptive strike also risks a full-scale war on the Korean peninsula. North Korea has thousands of pieces of artillery aimed at Seoul and, according to some estimates, it could obliterate the city in as little as two hours.

Even if a war against North Korea is ‘successful,’ few are willing or ready to deal with the aftermath. The United States lost its taste for nation building and is unwilling to deal with state collapse after two failed efforts in the in the last 15 years. Following the collapse of the North Korean state, the region would need to aid millions of refugees, rebuild a failed state and develop and implement a unification plan in concert with South Korea.

Since 1991, South Korea has collected far short of the estimated US$500 billion needed for unification. Integration of the North Koreans would also be difficult as defectors have faced discrimination and younger South Koreans are increasingly not interested in unification at all. Questions of whether a united Korea would keep its nuclear weapons or what kind of government would follow are ones no one is ready to answer.

The international community has chosen to maintain the status quo because of the high costs of solutions, difficulty in finding consensus and inability to escape classic realist logic. Following the 5 April missile test, a senior White House official declared, ‘the clock has now run out and all options are on the table’ — perhaps indicating that the clock is running out for the international community as North Korea gains leverage with each passing day.

It is also important to realise that inaction means millions of North Koreans will continue to suffer under the brutal Kim regime. North Koreans are paying for their oppressive government and for an international community that has found the status quo to be more acceptable than the alternatives.

Tom Le is an Assistant Professor of Politics at Pomona College.