by David Smith in Washington
https://www.theguardian.com/us-news/2017/mar/03/russia-trump-watergate-kislyak

Donald Trump flew out of Washington on Friday but was unable to leave a gathering storm of allegations, intrigue and unanswered questions about his ties to Russia behind him.

It was Watergate, now it is likely to be Trump Towers Scandal–Momentum to Impeach 45th POTUS grows stronger, thanks New York Times, The Washington Post and CNN

The US President’s joint address to Congress this week was well received but was rapidly overshadowed by revelations that his Attorney-General, Jeff Sessions, had twice spoken with the Russian Ambassador during last year’s presidential election.

As it has emerged that other members of the Trump campaign – including his son-in-law Jared Kushner – also met with the Ambassador, Sergey Kislyak, the Kremlin connection seems destined to be the putative scandal that will not go away for the White House.

The relentless drip-drip of evidence has prompted comparisons with the Watergate affair that felled President Richard Nixon. It has also become regular sport for comedians on late-night TV.

In Florida, the President was due to visit a school and meet Republican leaders on Friday but Democrats kept up the pressure in Washington. They argued that Sessions’ meetings with the ambassador contradicted his own sworn statements to Congress during his confirmation hearing. Sessions claimed on Thursday that he met the ambassador in his capacity as a senator, not as a campaign surrogate.

On Friday, the White House tried to steer criticism of Trump associates and their meetings with Russian officials away, by drawing parallels with Senate minority leader Chuck Schumer, who was photographed meeting with the Russian President, Vladimir Putin, in 2003.

In a characteristic diversionary tactic, Trump tweeted an old photo of Schumer and Putin smiling and snacking together with the message: “We should start an immediate investigation into @SenSchumer and his ties to Russia and Putin. A total hypocrite!”

Schumer swiftly replied: “Happily talk re: my contact w Mr. Putin & his associates, took place in ’03 in full view of press & public under oath. Would you &your team?

Happily talk re: my contact w Mr. Putin & his associates, took place in ’03 in full view of press & public under oath. Would you &your team?

Speaking to reporters, the White House deputy press secretary Sarah Sanders echoed the president: “I mean Chuck Schumer sitting and having drinks with Putin and that’s not a news story, but apparently a volunteer for a campaign bumping into one at a conference where there’s, again, dozens of other ambassadors is newsworthy.”

Nancy Pelosi, the House minority leader, said the Attorney-General’s decision to recuse himself from an investigation into Russian-backed hackers’ interference in last year’s presidential election did not go far enough.

“Everybody knew that there was something completely out-of-order that was going on, so for him to say, well, I was just meeting with him in the normal course of a senator meeting with an ambassador, the Russian Ambassador, everybody knew was hacking our system is beyond naive,” she told an event organised by Politico in Washington. “It’s almost pathetic. It’s almost pathetic. 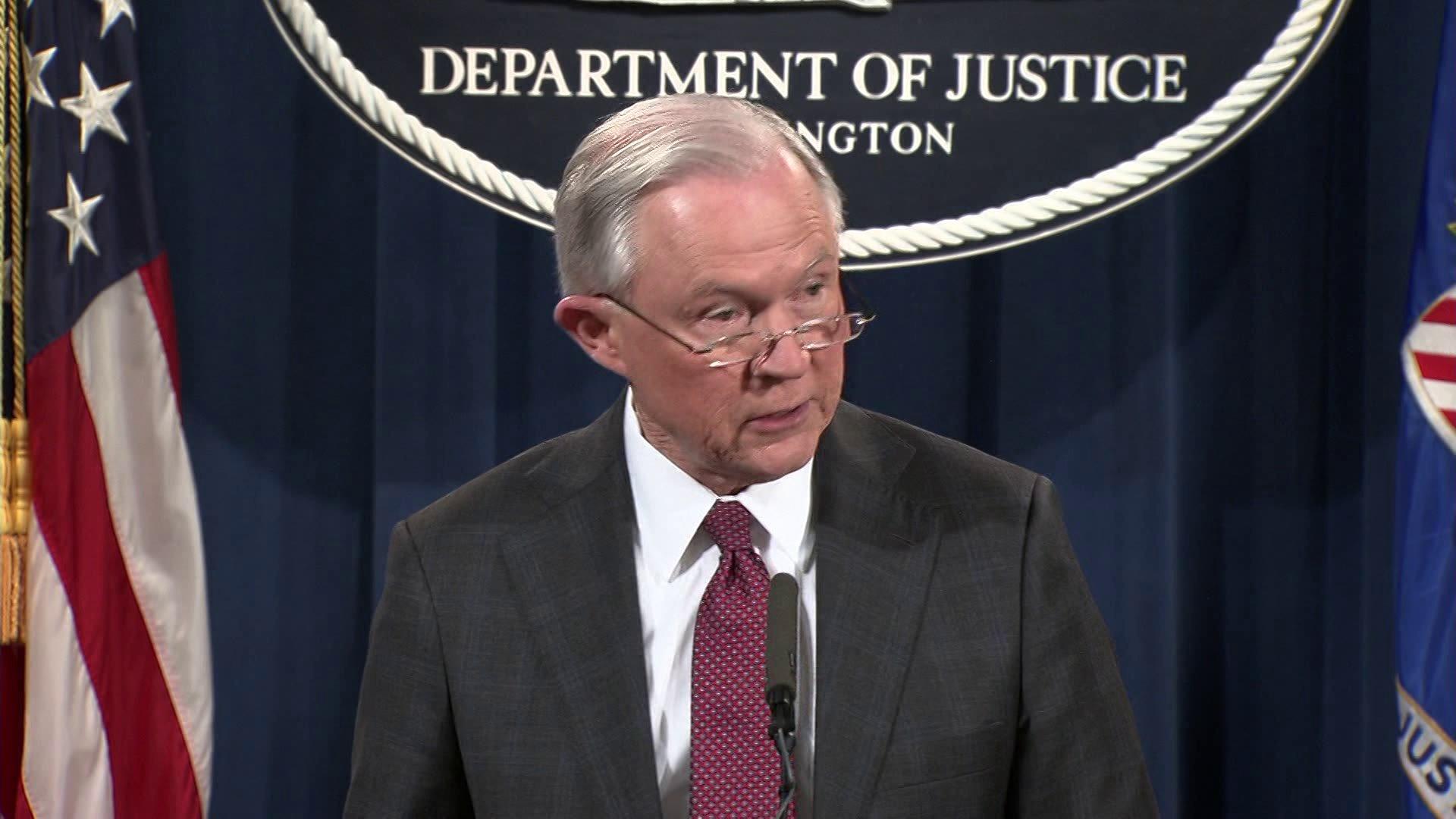 Some US media reports have suggested that Kislyak acts as a spy recruiter, a charge that Moscow has ridiculed as paranoia.

Pelosi added: “So this recusal is an admission that something went on but it’s not sufficient. There are two things. One is the recusal as a surrogate of then candidate Trump’s campaign and having communication with the Russian government knowing they were hacking our system. That’s what the recusal is about, however narrow it is.

“The other part of it is the possibility of perjury, which is punishable by law for anybody else. Certainly we should have that be standard for the highest-ranking law enforcement person in our country.”

Sessions, who was the first senator to endorse Trump for president, told his confirmation hearing in January that he “did not have communications with the Russians” and did not know of any by other campaign staff.

Democrats have variously called on him to recuse himself from all potential investigations, retestify before Congress, resign or be charged with perjury, while demanding an independent commission to investigate. Richard Blumenthal, senator for Connecticut, urged the embattled attorney general to return to the Senate judiciary committee to “testify under oath” about the conversation at his office with Kislyak.

“I’d like him to explain what was said during that September 8 meeting,” Blumenthal told MSNBC’s Morning Joe program. “And what came of it, and also what other meetings there may have been, because if he misled us as to that meeting, what other meetings might he also have failed to disclose?”

The congressman Adam Schiff, the top Democrat on the House intelligence committee, has called for Sessions to quit, saying he “clearly misled” the Senate about contacts with Russian officials, and demanded that a special prosecutor be appointed.

Schiff also accused the FBI Director, James Comey, of withholding crucial information about its investigation into Russian meddling in the election, and raised the prospect of subpoenaing the agency.

“I would say at this point we know less than a fraction of what the FBI knows,” the California Democrat told reporters after a briefing with Comey. “I appreciate we had a long briefing and testimony from the director today, but in order for us to do our investigation in a thorough and credible way, we’re gonna need the FBI to fully cooperate, to be willing to tell us the length and breadth of any counterintelligence investigations they are conducting. At this point, the director was not willing to do that.”

Speaking to Fox News on Thursday evening, Sessions, a former senator from Alabama, reiterated that he did not discuss the campaign with Kislyak. “When I campaigned for Trump, I was not involved with anything like that,” he said. “You can be sure.”

Despite the conclusions of US intelligence agencies, Sessions refused to say whether Putin favoured Trump over Hillary Clinton in the presidential race. “I have never been told that,” he told the host, Tucker Carlson. “I don’t have any idea, Tucker – you’d have to ask them.”

Trump has consistently denied business or political ties with Russia but has also been conspicuously reluctant to criticise Putin and raised the prospect of reviewing sanctions against the country. Opponents argue there is circumstantial evidence that Trump colluded with Moscow to help his campaign but definitive proof has remained elusive.

Last month Trump’s national security adviser, Michael Flynn, was forced to resign amid controversy over his discussions with Kislyak in late December.

On Thursday, it emerged that Kushner joined Flynn at a private meeting with the Ambassador at Trump Tower in New York. Another campaign aide, Carter Page, did not deny meeting Kislyak during the Republican national convention.  And the Wall Street Journal reported that Trump’s son, Donald Jr, was probably paid at least $50,000 for an appearance late last year at a French  think tank whose founder and wife have strong ties to Russia.

Trump, meanwhile, said that Sessions was the target of a “witch-hunt” and declared his “total” confidence in him.

He tweeted: “This whole narrative is a way of saving face for Democrats losing an election that everyone thought they were supposed to win. The Democrats are overplaying their hand. They lost the election, and now they have lost their grip on reality.”

19 thoughts on “Will Russia connection become the Trump administration’s Watergate? ( A Political Waterloo too)”