The huge increase in protesters from the first to the third rally against Ahok can be explained by participant mobilization theory, A’an Suryana writes. 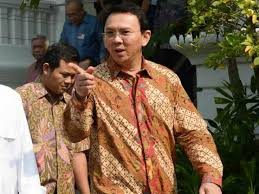 Certain radical and conservative groups, claiming to represent Islam, have held regular protests against incumbent Jakarta Governor, Basuki Tjahaja Purnama alias ‘Ahok’, since he assumed office in 2015. However, it is only recently that their initiative has drawn a massive turnout of protesters, the latest of these being the rally on 2 December 2016. Why the sudden change?

The successful framing of Ahok as a ‘blasphemous Jakarta governor defaming Islam’ struck a chord among many Indonesian Muslims, which spurred their widespread participation in the “Defending Islam” rallies of the past few weeks.

David A Snow and Robert D Benford propose that a successful people’s mobilisation depends on whether the leaders of a movement complete three core framing tasks. First, the identification of the problem followed by the attribution of blame. Second, the identification of a solution, as well as the strategy, tactics and targets to attain it. Third, a call to engage in corrective action. The higher the degree of interconnectedness and robustness among the three tasks; the higher chance of the people’s mobilisation achieving success.

These rallies have their origins in the frequent protests that conservative and radical organisations, such as the Islamic Defender’s Front (FPI), had previously organised against Ahok, who is of Chinese descent and Christian. Through the protests, the organisations were framing Ahok as someone who was not fit to lead a Muslim majority capital because of his religion. The Quran, according to their interpretation, prohibits Muslims from supporting non-Muslim leaders. 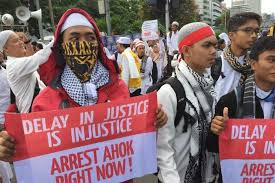 These initial protests attracted only a low turnout, principally because the participating organisations suffered credibility problems due to their earlier, frequent participation in mass violence.

But, the anti-Ahok movement finally gained momentum after their target delivered a speech in the Thousand Islands, north of Jakarta, in late September 2016. Seeking re-election, Ahok lashed out at some politicians whom he claimed have used the Quran’s Al Maidah articles to undermine his re-election bid. It was not the first time that Ahok had used the exact same criticism against his politics opponents. But this time, his criticism caused a backlash. Two weeks after the speech, a lecturer’s Facebook post regarding the speech triggered further political tension in the capital. Spearheaded by the FPI, conservative and radical Islam organisations swiftly seized the opportunity to up the ante against Ahok by organising a protest on 14 October in front of Jakarta’s City Hall demanding Ahok’s imprisonment for defaming the Quran. While drawing only a few thousand people, it helped narrow down the attribution of blame. Before this first rally, Ahok was already the target of protests on various issues: his style of brash and blunt speaking, the eviction policy that alienated him from the poor and his Christian identity that some radical and conservative Islam organisations used to label him unfit for office. But, at that time, the protest agendas were disjointed, and failed to resonate with lay people.

The period following the 14 October rally saw these organisations’ portrayal of Ahok as a blasphemous governor gain ground and start to resonate among those who identify themselves as Muslim. An increasing perception that the police were sluggish in responding to the demands for Ahok’s imprisonment also aided the mobilisation.

Sectarian sentiment received a significant boost after some individuals established a movement claiming to represent the influential cleric body, the Indonesian Council of Ulema (MUI). This movement, which called themselves the National Movement Guarding MUI’s Edicts, joined forces with the FPI to arrange an even bigger rally on 4 November.

At this stage, following Snow and Benford’s proposition on core framing tasks, the two movements’ leaders reached a consensus that the problem had been identified, namely Ahok’s alleged defamation of the Quran. They were already resolute about the effective strategy and solution that they needed to pursue; pushing for the state apparatuses to arrest Ahok in the blasphemy case. The third task, calling for corrective action, was no longer a daunting one as Muslims were already hearing the messages amplified through the Muslim conservative’s networks or the media.

The two movements grew, materialized in two rallies on 4 November and 2 December, after gaining either open or tacit support from social and political establishments, such as political parties fielding candidates to challenge Ahok in the gubernatorial election, or big moderate Muslim organisations such as Nahdlatul Ulama and Muhammadiyah. The social and political legitimacy that these organisations possess assured those identifying as Muslim that participating in anti-Ahok protests had merit. Together, these factors resulted in the massive turnout for the 4 November and 2 December rallies.

A’an Suryana is teaching this semester at the School of Government and Public Policy (SGPP), Sentul, West Java province.

7 thoughts on “The Fate of Game Changer Ahok–Mass Protests”