This outcome is not unexpected because our Judiciary is not independent.  Out of the window goes our system of checks and balances when the Executive Branch overpowers our Judiciary and Parliament (the Legislative branch), and the Rule of Law is absent. 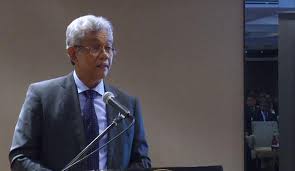 The Five-member bench led by Chief Judge of Malaya Justice Zulkefli Ahmad Makinudin ruled there was no bias or procedural unfairnes in the decision of the previous Federal Court panel.

On the issue of the premature and swift response from the Prime Minister’s Office to the Sodomy II verdict on February 10 last year, Justice Zulkefli said while the statement, as argued by the appellant, had given the public the impression that Anwar did not receive a fair and independent hearing, the court took the view it was not within the control of the court to stop the issuance of the statement.

Ruling further that there was no merit in the allegation that the statement was issued prematurely, he added this did not fall under the ambit of Rule 137 (that allowed a review).

“There is no evidence to show that there was any communication whatsoever between the PMO and the Federal Court, either prior or subsequent to the decision on the case,” Justice Zulkefli said in the unanimous decision.

The other judges were Chief Judge of Sabah and Sarawak Justice Richard Malanjum, along with Federal court judges Hasan Lah, Abu Samah Nordin and Zaharah Ibrahim.

However Justice Malanjum was not on the bench today as he had to attend the funeral of a relative who had passed away.

Shafee’s conduct no bearing on outcome

The Federal Court also dismissed the questioning of the conduct of senior lawyer Muhammad Shafee Abdullah, who led the prosecution team in the Sodomy II appeals in the Court of Appeal and Federal Court, by Anwar’s lawyers.

Justice Zulkefli said while the appellant contended that Shafee’s speech at a roadshow had tainted the prosecutor’s office in conducting the trial fairly, the court was of the view that the alleged misconduct, if any, had no bearing on the outcome of the decision of the Federal Court.

“We noted there is no evidence furnished or averment of any sort made by the applicant to suggest that this alleged misconduct of the lead prosecutor had influenced the decision of the Federal Court on Feb 10, 2015,” he said. The judge further cited Shafee’s appointment as prosecutor by the Attorney-General’s Chambers.

On the earlier Federal Court’s judgment by Chief Justice Arifin Zakaria, which made mention of previous sodomy incidents that had been ruled as expunged by the High Court, Justice Zulkefli said this issue of misevaluation of evidence, improper direction and non-direction of the trial judge were not within the permitted circumstances that the court could exercise its inherent jurisdiction to review.

“We would like to state on this issue now raised before us that we found that it was not raised before the Federal Court. It is for this reason that we think the Federal Court did not address this point at all and hence no reason was given on the issue of the admission or rejection of the alleged inadmissible evidence,” he said.

On the issue of complainant Mohd Saiful Bukhari Azlan not bringing the lubricant KY Jelly, the Federal Court said according to the record of proceedings in the High Court, it was dealt with extensively by both the defence and the prosecution.

Justice Zulkefli said the earlier judgment by the Federal Court court held there was no conclusive proof that KY Jelly had spilled on the carpet and it was of the view that the carpet was not a critical piece of evidence to the prosecution’s case. “It is therefore our judgment that this issue of KY Jelly raised by the applicant is a non-issue and it had not caused injustice to the applicant,” he said.

While Anwar’s defence team maintained the integrity of the crime scene was compromised as Saiful had claimed the incident took place on the carpet in Unit 11-5-1, whereas the carpet was found in Unit 11-5-2, the court held that it could not accept the argument as the earlier panel ruled the issue of how the carpet was moved was not critical to the prosecution’s case.

“We do not think that we should look into what that other compelling evidence was as found by the Federal Court,” Justice Zulkefli said.

“For the above reasons, we find there is no merit in the application and this is not a fit and proper case for the court to exercise its inherent jurisdiction to make any order for the case to be reviewed,” Justice Zulkefli said.