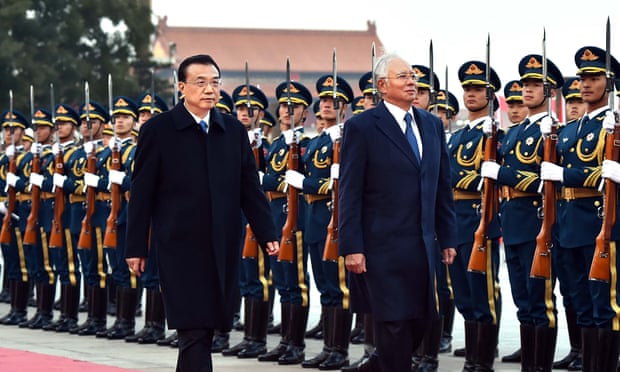 Malaysia’s perceptible tilt towards China especially in economic relations reflects Malaysia’s foreign policy of hedging major power influence in the region and globally. While it seeks closer ties with China, it does not imply that Malaysia is shifting away from the US.

Since Najib Razak assumed the premiership of Malaysia in 2009 China has featured significantly in his foreign policy. It was Najib’s father Tun Abdul Razak, Malaysia’s second prime minister, who was the first leader in Southeast Asia to establish diplomatic relations with the People’s Republic in 1974.

That said, Malaysia’s foreign policy has been one of hedging against major powers in the region and globally. While Malaysia has shown great awareness of China’s rise and importance in the Asia Pacific region, it remains highly cognisant of the political and economic role of the United States in the region.

Thus, Malaysia is among the 12 countries that have signed the US-sponsored Trans-Pacific Partnership (TPP) Agreement in Auckland, New Zealand, on 5 February 2016. The TPP is interpreted by some observers to be a crucial pillar of US rebalancing in the Asia Pacific to check China’s rising political and economic influence.

However, it is uncertain whether the US would commit to the TPP after the Obama administration. Thus, seemingly as a hedge to the signing of the TPP, the Malaysian parliament approved on 20 October participation in the Asian Infrastructure Investment Bank (AIIB) — thought to be China’s brainchild — just prior to the Malaysian premier’s seventh state visit to China this week.

Recent developments in Malaysia demonstrate a perceptible tilt towards China, particularly in economic relations. When President Xi Jinping unveiled China’s 21st Century Maritime Silk Road or “One Belt One Road” (OBOR) strategy some three years ago, Malaysia welcomed the initiative and has remained very enthusiastic about it.

On 3 September 2016, the Malaysian Minister of Transport, Liow Tiong Lai (concurrently President of the political party Malaysian Chinese Association, MCA) extolled the virtues of OBOR in a Malaysia-China Business Dialogue event in Kuala Lumpur. Liow suggested that Malaysia could be “China’s gateway to ASEAN” and a crucial link to the 65 OBOR countries across Asia, Europe and Africa.

This new Malaysian posture has come together with concrete developments in Malaysia-China relations. Malaysia is currently China’s largest trading partner in ASEAN with total trade of some US$100 billion expecting to reach $160 billion by 2017. China has also recently become the largest direct foreign investor in Malaysia, overtaking Singapore, Japan, Netherlands and the US, through buying assets in Malaysia’s troubled 1MDB.

These multi-billion assets bought from the Malaysian national fund include Edra Global Energy sold to China General Nuclear Power Corp for $2.3billion and a 60 percent stake in Bandar Malaysia, 1MDB’s flagship 197-hectare property site in Kuala Lumpur, at a price tag of $1.7 billion to China Railway Construction Corp. The China railway corporation is also thought to be in pole position to undertake the Kuala Lumpur-Singapore high-speed railway worth some $16.6 billion.

More interestingly, in keeping with its OBOR policy, China has been deeply involved in the rebuilding and refurbishing of sea ports in Malaysia. According to Transport Minister Liow, Malaysia’s has signed a “port alliance” with China linking six of Malaysia’s ports to 11 of China’s. Currently, China is helping Malaysia to rebuild and expand port services at Klang, Malacca and Carey Island in the Straits of Malacca and Kuantan on the South China Sea. Some 70 to 80 percent of the ships passing through the Straits of Malacca are said to originate from China.

Kuantan on the east coast of the Malay Peninsula would be of great importance to Chinese maritime trade as well. Liow said his ministry is therefore encouraging China to participate in port construction across 120 kilometers of the Malacca Straits. According to Liow, the port alliance with China would help develop shipping, logistics and other related industries to augment the $1 trillion worth of OBOR trade.

There are three ramifications of Malaysia’s embrace of OBOR. Firstly, OBOR, which is partly funded by the AIIB, would help China to further expand its prominence in Southeast Asia. It is expected that through the OBOR, Malaysia would be a key node for China to access the ASEAN market. China’s increased economic prominence through OBOR and the AIIB could improve China’s image among ASEAN countries as a major player in boosting the economies of Southeast Asia.

The strengthening of economic ties between ASEAN and China would obviate potential conflict, and enhance the benefit for ASEAN and China to work closely together economically.

Secondly, Malaysia’s perceptible tilt towards China in the OBOR venture could be a nudge to the US to maintain its current commitment to Southeast Asia. If the US, under its new President, reneges on its commitment to TPP, this would be a setback for Malaysia as the TPP has the potential to enhance Malaysia-US economic ties.

Thus, Malaysia’s favourable tilt towards China and OBOR could help to cushion some of the negative fallout of such a scenario. It could also be a signal to the next US President that America risks losing the support of its friends to China if the US does not continue its economic rebalancing role in Asia.

Thirdly, domestically, strengthening economic growth would be advantageous to Najib’s administration. Due to domestic political challenges having a strong economic performance would enhance the legitimacy of Najib’s government. The economic benefits of OBOR would play a vital role in buttressing Najib’s regime.

Najib’s recent visit to China  will improve bilateral ties significantly with OBOR featuring prominently in this development. This does not however imply that Malaysia is coming under China’s sway while shifting away from the US.

Drawing closer towards China economically is a pragmatic move by the Malaysian government to expand its economic space and boost economic growth. Provided the US continues its commitments to Southeast Asia Malaysia will also seek to build up ties with the US for regional peace and development.