COMMENT: For months, I have worried about a Trump victory, and it has become a reality. Donald Trump won the US presidency yesterday. He achieved a political upset that makes this year’s baseball World Series victory of the Chicago Cubs pale in comparison. As they were in Brexit, the polls and pundits were wrong.

The dominant image is that this is a victory for racism, misogyny and anger. Americans have been grappling with the decline in global power and rising inequalities. Insecurity and fear have been underlying drivers of angst and despair. The dark forces in America have been growing stronger and empowered, with Trump representing and channelling them to his side.

To say the campaign has been ugly would be an understatement. From the onset of the campaign, Trump controlled the narrative and ultimately Hillary Clinton was not able to project as powerful an alternative message. Buttressed by massive media coverage, an effective use of social media (especially when he was not controlling his Twitter account) and a partisan FBI director, Trump won out against the odds. Like the famous Pogo comic strip, “We have met the enemy and he is us.”

The campaign however was won in the middle ground. Two additional important more positive factors shaped the outcome. Trump tapped into a part of the American psyche that offered a return to the past, a nostalgia for the times when America was respected and economically thriving. The salesman he is, Trump sold the dream of the past. And there are many people who live in the past. At the same time, he represented change.

Moreover, he was (and is) an outsider. Americans have deep distrust for those inside the Washington DC Beltway, and the media and intellectuals who are seen to represent them. Hillary Clinton embodied, for many, more of the same. She was seen as too smart, too connected to the establishment, especially corporations.

For some who voted for Trump, they did so out of a desire to make the system better, to shake up the system with the hope that something positive would result. My own view disagrees with this sentiment, but in understanding this election outcome I appreciate it is not all about hate and negativity.

The world is grappling with what this means, and it will take some time for things to settle and for the new administration to find its footing. As someone who voted for Hillary, I take solace from three features of American politics.

First of these is the reality of pendulum swings in American politics. The Democrats have controlled the White House, and while they have faced opposition from the Republicans in the House and Senate, they have had the opportunity to introduce healthcare and leave important legacies on Cuba, Iran and Myanmar. Obama will leave office with a stronger economy, leading a recovery from the 2007-2008 financial crisis. With this election, the pendulum swung in the other direction, and it will swing back. In 1,460 days, there will be a new election.

Second, there are checks on power that operate in the US. Despite the battery of attacks in the 2016 campaign, American political institutions are resilient and designed against a concentration of power. The media is vibrant and will continue to be so.

Trump is likely to also face considerable resistance inside the bureaucracy, which will curb his powers. His relationship with his party, the Republicans, has been rocky, even antagonistic; this will be difficult for the new president to navigate. He will face impeachment if he violates the laws, as the office of the presidency comes with expectations of leadership that he will be expected to follow.

Finally, the reality is that as in physics, all actions lead to counter-reactions. This means that those that oppose him will strengthen. Trump does not have a mandate from all Americans. The anger he generated during the campaign assures that he will not have a long honeymoon or the benefit of the doubt of other presidents. He will be expected to deliver his promises to his diverse group of supporters and in doing so, this will provoke responses.

As an outsider, it will take some time for him to adjust to Washington and offer any deliverables. In all likelihood, he will look for low-hanging fruit and rely on his loyalists and former insiders for guidance. Many of his likely cabinet choices – Newt Gingrich or Chris Christie – have considerable baggage/scandals of their own, The Trump presidency will likely not be pretty, but the political polarisation of America so evident in the results will likely deepen and harden ahead. 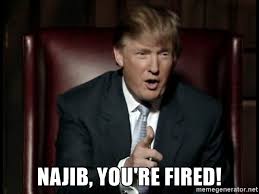 What will all of this mean for Malaysia? The US Embassy made a point yesterday to assure Malaysians that all will be the same in the ‘partnership.’ This is not correct. Trump’s victory will mean significant changes for Asia, and Malaysia, and how the US is seen in Asia. There will be new approaches, allies and priorities. Judging from the campaign, a few key items stand out.

Trump will likely be a more isolationist, inward-oriented leader. Trump will oppose trade and immigration and this will spill over into ties between the two countries. The Asia pivot is effectively over.

Trump is anti-Muslim and in all likelihood, this will lead to more confrontational approaches and difficult relations with the Muslim world.

Trump is not a democrat by any measure of the word and this will mean weaker positions on human rights standards as democracy itself will face a further battering ahead.

Yet, it remains to be seen what role Trump will take in the White House. If the campaign and its results have taught us anything – it is to expect the unexpected.