The Fascination with a certain Dr Zakir 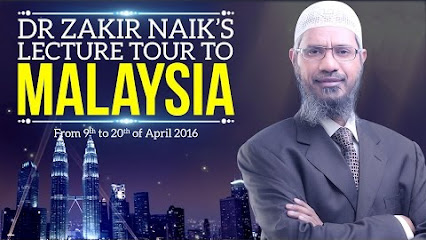 Dr Zakir Naik is a well-known preacher who has been preaching to sell-out crowds around the world. He is the Muslim version of Billy Graham and other famous Christian evangelists.

The Police first cancelled his forum in Terengganu but the Home Minister himself later allowed proceedings to go ahead in Melaka, with a change of topic from the original “Similarities between Hinduism and Islam”. Now Perlis wants him too. I was amongst the earliest to congratulate the Police for cancelling the permit.

Malays are generally attracted to anything religious, even if remotely so. They are easily fascinated with religious preachers, which explains why Dr Naik has been coming here so very often. Islamic resurgence  has contributed  to  the rise of many successful preachers  in this country, as you can see  from the success of Ustaz Azhar Idrus, and many others on TV .  Now  they  bring in English speaking preacher from India Zakri naik.  How times change. When I was growing up it was  Elvis and the Beatles  that filled the airwaves and the halls  ; now the preachers.

I wish the Malays are  more fascinated  with more worldly  matters , like what is  a bond Issue , or what is  off shore banking, or  a government guarantee. It would help them understand how 1MDB was conceived  and the process by which the  grand theft took place. Tan Sri Muhiyuddin was telling us how difficult  it was for UMNO members to understand 1MDB. I can understand why, with the kind of educational system we give to the Malays. If the Ministers in the Cabinet are having difficulty coming to terms with the subject, how much understanding can we expect from  ordinary intellectually challenged Malays.

Why are the Malays fascinated with religious preachers? Because preachers need not have any  real knowledge, except what they described as divine knowledge. No  understanding is required  from the listeners  of  what they say ; they only need to stir up the emotions. Understanding  1MDB is more ardours;  one needs to understand a little about economics, about banking, about how government works., and how the Prime Minister operates in this country.

I believe the Police made the right decision. There is nothing useful that can be obtained  from  having an “understanding”  of different religions  if the main purpose is to convert the listener . Zakri Naik is proud to be described as a Muslim preacher who has converted many unbelievers to Islam.  When you start talking of how great your religion is , you would in the same breadth put down some aspects of the other religions; otherwise how do you score points?  We do not need more religious rivalry than we already have.

Out of the woodwork came the liberal writers  and the defenders of freedom of speech decrying the decision of the Police. Some of them were quoting Voltaire about defending a person’s right to say whatever he or she wanted without agreeing with him. I tell them wake up. Do they  really think Zakir Naik is here  as an academic ?  No, he is a preacher, a converter,  and is  more likely  to be a  religious mission to convert as many non believers as possible . The law may allow this, but its effects on peace and harmony are matters which the Police must be concerned  with.

Would the government grant the same freedom to Christian and Hindu evangelists  from India  and elsewhere ? I doubt it. The less preaching we have in the country, the better it is for peace and harmony.

I am also for freedom of speech,  and I see the benefit of debates and intellectual exchange—but on more suitable subjects. There is nothing intellectually stimulating  discussing religion;  it only will generate  controversy. Talking about other people’s religion  will only  end up  with  heated  exchange and none of the participants will come out of it the wiser.

If the proponents of free speech want to keep themselves  intellectually busy, they should hold forums, debates, exchanges and discussions on science, history or philosophy. Have debates on public policy—on benefit of  off  shore tax havens , for example—or the future of public health. Talk about gravity or interstellar travel for all I care, because these subjects do not lead to fistfights or Molotov cocktails being thrown at offices.

They should know that in Malaysia religious forums are permitted only in a controlled environment, and some religions have more leeway than others.

So stop kidding yourselves that your rights to intellectual discourse or freedom of speech are being denied just because a preacher—who has described Osama bin Ladin as a “Soldier of Islam” and has said that Jews are permanent enemies—is denied the space to continue with his ceramah.

7 thoughts on “The Fascination with a certain Dr Zakir”