ASEAN leaders will soon converge in the United States for a Summit with President Barack Obama. The Sunnylands summit, late into Obama’s last year in office, is a marker of the US pivot to the region. His administration should be credited with giving closer attention not just to giants such as China, Japan and India, but also to the 10 medium- and smaller-sized countries of the region. 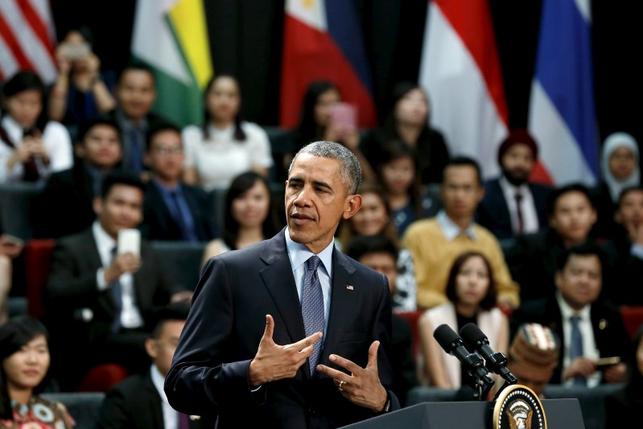 It was Obama, after all, who inaugurated the US-ASEAN leaders’ meeting back in 2009 and evolved it into a series of summits. Choosing the Sunnylands venue for the upcoming US-ASEAN Summit, where China’s President Xi Jinping was recently hosted, symbolises a parity in US priorities.

If Washington can truly support ASEAN as the hub for the wider region, a greater sense of participation and less conflict can result. ASEAN’s members have inaugurated a community among themselves that, while far from perfect, shows greater economic cooperation and habits of peaceful cooperation.

Just in January, US Secretary of State John Kerry called for ASEAN unity while visiting Laos, the current chairman of the group. But reaching out to ASEAN can be read as being an effort in the context of controversies over the South China Sea, where China has claims to territories that overlap and conflict with claims by four ASEAN member states.

Very recently, US forces conducted a freedom-of-navigation exercise into waters that China claims. Military alliances in the region, especially with Japan and the Philippines, have also been re-emphasised. Many may therefore think that the US support for ASEAN unity is merely instrumental, a rallying call against Beijing.

To grow the US-ASEAN relationship on a broader and stronger foundation, there are things that can and should be done by the US, as well as things that should be avoided.

On the South China Sea, the US should support the ASEAN effort to negotiate a Code of Conduct with China, which will help to prevent tensions from escalating. But it must be a united Asean that leads on this, and the group’s position cannot be dictated by any single claimant to the disputed areas. Nor will it help if China seems confronted by the US and its allies.

Just as importantly, there are other areas in which the US should more actively promote cooperation. Climate change is one example. The Obama administration has made notable headway with Beijing and also established a dialogue with Indonesia, the largest emitter of greenhouse gases in ASEAN.

Following the landmark climate-change agreement struck at the Paris summit in end-2015, further effort should be made for cooperation between the US, China and ASEAN as a whole.

There are also things that might negatively affect the group’s relations with the US. One of these is to over-emphasise democracy – no doubt a vital part of US foreign policy, but a practice among only some ASEAN countries.

After the military coup of 2015 in Bangkok, the US has cold-shouldered its erstwhile treaty ally, Thailand. US law mandates that some measures must be taken. However, these sanctions have gone further and unhelpfully so because if the current Prayuth Chan-o-cha government feels ostracised by the US, there is every reason for the considerable influence that Beijing has over Bangkok to grow further.

The Obama administration should instead balance its approach with a dash of another US characteristic – pragmatism. Look at Kerry’s January visit to Laos and Cambodia, neither of which are bastions of democracy.

Consider especially the US’s engagement with Vietnam. The latter remains a socialist-party state and one that has just selected its leadership through its own rather arcane and secretive process, rather than an open election.

Yet, rather than criticism, Vietnam has been brought into the Trans-Pacific Partnership Agreement (TPPA), the largest regional-trade accord in history that the Obama administration has pushed as the main economic pillar in its engagement with Asia. The TPPA illustrates how US initiatives can sometimes inadvertently undercut ASEAN unity.

The TPPA includes 12 countries in the Asia-Pacific, but only four ASEAN members – Brunei, Malaysia, Singapore and Vietnam. The trade pact has been heralded as a “new age” treaty that creates stricter requirements for deeper integration among nations. There are concerns, therefore, that the economic and trade effects fostered by the TPPA will be inconsistent with ASEAN’s own effort at developing an economic community with an integrated production base.

This is especially as the TPPA will connect those four ASEAN members more deeply with the US and Japan, while leaving others out. It would help if the US actively supports the ASEAN Economic Community, and encourages more Asean members to enter into the TPPA.

Indonesia’s President Joko Widodo has already made this point publicly after his bilateral meeting with Obama late in 2015. There are signs, too, that the Philippines is keen on joining the TPPA.

A more important TPPA entrant would be Thailand. Even if a military-backed government is in charge, there is clear economic logic to support this. Of the three, Thailand’s economy is the most integrated with the rest of ASEAN and Japan.

Of course, joining the TPPA will not be easy. Even for the 12 governments already in the TPPA, the coming months will see if their domestic lawmakers are willing to ratify what has been negotiated. But discussions on new members can start in parallel as a key economic engagement with the ASEAN countries not already part of the trade pact.

To secure Congress support for the TPPA within the US itself, the Obama administration will no doubt argue that agreement is essential to the US’s pivot and widens its circle of friends in the region. Support for ASEAN unity, which the upcoming summit signifies, can and should be another reason.

To make US-ASEAN engagement work, the Obama administration must look not only at the South China Sea. US-ASEAN engagement must be built on a broader foundation on issues that are intrinsic to the group itself, and much will depend on whether the US can truly and pragmatically engage ASEAN’s diverse membership. – Today online, February 5, 2016.

* Simon Tay is chairman of the Singapore Institute of International Affairs, an independent and globally ranked think tank, and Associate Professor at the National University of Singapore Faculty of Law.

* This is the personal opinion of the writer or publication and does not necessarily represent the views of The Malaysian Insider.