Just 20 months short of turning half a century old, the Association of South-east Asian Nations (ASEAN) will officially become an integrated community. On December 31 this year, rotating ASEAN chair Malaysia will declare this to be the case.

The integration has essentially been and will continue to be in the field of economics. ASEAN has been ambitious and proactive in creating a common market and production base. Other areas of integration, however, by comparison and by design, take a backseat, and events there have been more ad hoc and opportunistic.

Given the way things work in this part of the world, understanding this reality requires a historical take that highlights the region’s uniqueness. Southeast Asia as a region had until recent times been largely peripheral to the greater sweep of history. This historical circumstance has many implications, and two of the most important are discussed here. First, let’s look at the region from within.

Although the region exhibits many cultural layers — and the overlaps vary greatly from country to country — there is no civilizational imperative for the region to integrate politically or otherwise.

A quick comparison with Europe will make this condition quite obvious. In Europe, attempts to unite the continent by force had been occurring since the end of Roman times. In contrast, South-east Asia’s diversity is rendered all the deeper by political and religious differences. This leads to conceptual miscellany in the understanding of basic concepts such as power, leadership, people or the role of patronage in politics.

Political integration in South-east Asia is therefore inconceivable in many ways. Collaboration in this area is more about border security matters, and non-traditional security threats such as epidemics, natural disasters and ecological catastrophes. 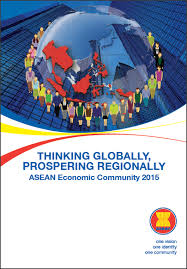 The region is also made up of relatively new polities and governments that are still very much focused on nation-building rather than integrating with their neighbours. In truth, it is only recently with budget airlines that South-east Asians have travelled more within the region. Most do not know their neighbours as well as they might imagine.

Second, let us look at the region within the larger geopolitical context. The region functioned both as a destination and thoroughfare throughout history for travellers, armies and missionaries from outside. Movement of people, goods and culture in and out of the region had been very free.

This porous characteristic made the region very vulnerable to colonisation, invasion and other turf wars. In the 19th and 20th century, the region was colonised by the Europeans, invaded by the Japanese, fought over by nationalist movements against the returning Europeans, and was a battle zone in the Cold War.

In the process, labour migration during this period changed the region’s demographics forever, and continues to do so today in new ways.

Gaining independence for many of these countries was not a return to an old polity; it was instead the start of new ways of political organisation that their newly installed governments did not always understand or master.

There is consequently a lot of defensiveness at the national, ethnic or cultural levels. Arguments over which country was the origin for which popular cultural item have been common, including whether the Malaysian national anthem has Indonesian roots or not, for example. And amazingly, after decades of seasonal haze clouding the region due to forest fires in Indonesia, it was only earlier this month that Jakarta accepted help from its gasping neighbours to help fight the fires.

Largely because of these historical geo-strategic and geopolitical conditions, South-east Asia is today almost by default a power vacuum. The nations each by itself cannot keep major powers out. The collective strength that Asean provides for each of its members is therefore highly valued.

Suspicions remain so strong that outside powers, whenever they can, will reduce countries in the region to pawns in a bigger game. What is obvious to all is that economics decides the pace and nature of ASEAN integration. However, the economics that binds the region is essentially nationalist economics.

ASEAN’s modus operandi of consensus and unanimous decision-making is thus not a choice but a necessity. None of its members can accept being dictated to by its neighbours through a majority decision.

There are of course those who think that it is time for this tradition to be broken, but no major player really believes that this will happen any time soon. Nevertheless, ASEAN economic integration has progressed steadily, and this provides potential for the region’s new nations to influence international trends towards their own benefits. This is why ASEAN centrality is so important to these countries.

Much has been done to bring to fruition the ASEAN Economic Community (AEC). Many of the measures taken are gradual, slowed by long and laborious discussions and countless compromises. But then, what it is aiming to achieve is impressive as it is.

The AEC blueprint combines 625 million people into one integrated market and production base where the flow of goods, services, investments and skilled labour is free. Between 2008 and 2013, intra-regional trade jumped by 33 per cent from US$458.1 billion (RM1.9 trillion) to US$608.6 billion.

What ASEAN will be saying in December is that most of the necessary measures for South-east Asia to evolve into an economically-integrated region have been taken. Since early this year, it has been claimed that as much as 97.3 per cent of traded products within the region are duty-free.

Things are moving, and at a speed that its members are able to manage. But going forward, the question is whether ASEAN can keep pace with global developments. ASEAN has a tendency to be too dismissive of the relevance of the high speed at which the rest of the world is moving.

Furthermore, one worry often repeated today is that Indonesia, ASEAN’s biggest member, seems distracted by domestic issues, and its President, Mr Joko Widodo, is more interested in national solutions rather than regional ones. Time may not be on ASEAN’s side, and moving up a gear may be the region’s biggest challenge.