Malaysia’s Politics of Survival  by Elimination

A deepening political crisis in Malaysia is highlighting the country’s longstanding ethnic divides and its uncertain road ahead. Since early this year, Prime Minister Najib Razak has been caught in a scandal surrounding the heavily indebted 1Malaysia Development Berhad (1MDB) sovereign wealth fund. Among other points of controversy, Najib is struggling to explain the source of nearly $700 million deposited in his personal account.

This week, with Malaysia’s Parliament back in session, the opposition is renewing its efforts to oust the Prime Minister through a no-confidence vote — a measure that will succeed only in the unlikely event that Najib’s tightly consolidated party apparatus comes apart. Indeed, Najib is likely to remain entrenched in power for the foreseeable future. In the process, however, the political crisis in Kuala Lumpur will both expose and exacerbate broader challenges confronting Malaysia, particularly regarding divisions between the politically influential “Bumiputera” (the umbrella term for ethnic Malays and indigenous groups) and the economically powerful ethnic Chinese and Indian populations. At risk is the carefully balanced status quo that has enabled the Malaysian economy to flourish without communal disruptions.

On the surface, at least, the hits keep piling up for Najib: A steady drip of leaked documents has magnified scrutiny on the Prime Minister and spawned official investigations both in Malaysia and in countries where 1MDB has been active, including Switzerland and the United States. Najib, who also serves as Finance Minister, has come under fire from the country’s central bank chief, powerful figures from within his own ruling United Malays National Organisation (UMNO), and Malaysia’s nine state sultans — whose power is largely ceremonial but who are perceived as guardians of Malay heritage and religion. Most notably, longtime Prime Minister and UMNO boss Mahathir Mohammad, Najib’s former mentor, has gone on the warpath. Since publicly withdrawing support for Najib in mid-2014, Mahathir, who governed for 22 years, has called for more intensive probes, joined a major opposition rally in August, and urged his former adversaries in Malaysia’s long-beleaguered opposition to table a no-confidence vote. (Najib’s predecessor, Abdullah Badawi, resigned in 2009 at Mahathir’s behest.)

But the Opposition, with just 87 of the Parliament’s 221 seats, does not have the numbers to muster the two-thirds majority needed to remove Najib, even if it peels off disaffected lawmakers from the ruling Barisan Nasional coalition’s ethnic Chinese and Indian parties. Moreover, the opposition alliance collapsed this summer, and certain factions are noncommittal at most about ousting Najib — particularly the conservative, Malay Muslim-dominated Pan-Malaysian Islamic Party, which sat out the anti-Najib rally in August.

UMNO is similarly divided. Several powerful party leaders who have publicly criticized Najib’s role in the 1MDB scandal and expressed concern about damage to the party’s credibility still oppose the no-confidence vote. Even with the opposition at odds with itself and its charismatic leader, Anwar Ibrahim, behind bars, UMNO does not want to chance a snap election with the 1MDB affair still unresolved. It narrowly held onto power after losing the popular vote in 2013, after all. Whatever the Prime Minister’s sins, UMNO lawmakers naturally do not want to see the party fall as a result. The leaked documents have implicated essentially Najib and his wife alone, largely sparing other major UMNO figures. This suggests an orchestrated effort designed to oust the Prime Minister without sinking the entire party.

An internal putsch against Najib is more likely sometime after the parliamentary session ends. But even this is unlikely. Earlier this year, Najib postponed the next party elections to 2018 and purged some of his most powerful detractors. An emergency vote would take two-thirds of UMNO’s Supreme Council or a majority of the party’s 191 divisional chiefs, and Najib reportedly maintains strong support in both of these blocs. Nearly all UMNO lawmakers and leaders have benefitted from his largesse, and the fact that Najib’s political machine has proved resilient testifies to the power of his patronage network. Party dissent will need to reach a much higher pitch to oust him. Despite Mahathir’s best efforts, this has not happened — yet.

The crisis in the capital comes at a particularly bad time for Malaysia. With or without Najib at the helm (but particularly if he holds on), the years leading up to next elections, currently expected to take place in 2018, will be turbulent. In particular, an array of challenges is threatening Malaysia’s economic dynamism and the delicate ethnic balance that has undergirded the country’s remarkable rise. The political uncertainty is likely to exacerbate both issues, and vice versa.

A leading concern is that the scandal is diminishing Malaysia’s credibility with investors and driving down the value of its currency, the ringgit, which hit a 17-year low this month. Investors reportedly pulled around more than $4.5 billion from Malaysian stocks and bonds in the third quarter of 2015, while approved foreign direct investment declined by more than 40 percent through the first half of the year. Currencies have been racing downward across Southeast Asia, but the ringgit has performed worse than its regional counterparts — despite Malaysia having generally more favorable economic fundamentals and substantial foreign exchange reserves available to buoy it. 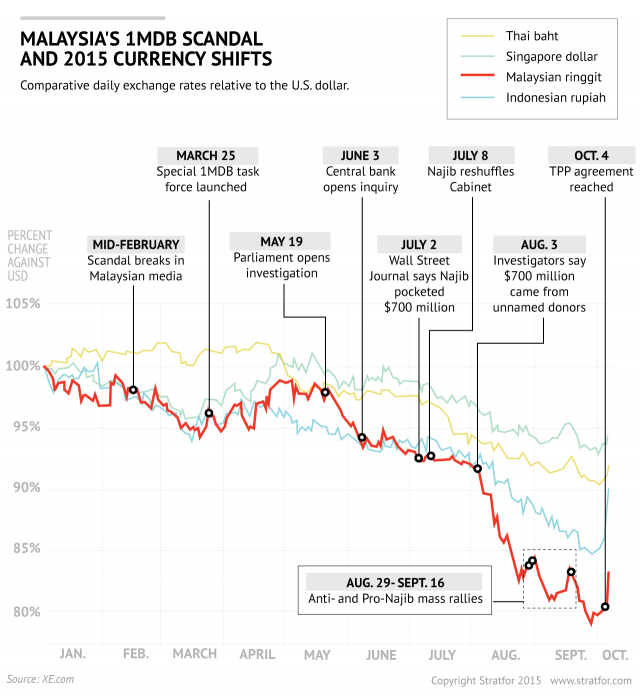 The country’s economic woes cannot be blamed solely on the political uncertainty. Even without the political crisis, Malaysia is facing economic headwinds because of low commodity prices and a looming interest rate hike by the U.S. Federal Reserve. But the scandal is certainly playing a role. Malaysia’s once globally esteemed financial institutions are now in question, and 1MDB is involved in nearly every key sector of the Malaysian economy, including energy, agriculture, tourism and real estate. Meanwhile, Najib’s influence over those purportedly investigating the sovereign wealth fund (in July, for example, he fired the Attorney-General) has raised questions about regulatory transparency and rule of law in the country.

Moreover, Malaysia’s reliance on semi-conductors and commodities such as oil, natural gas and palm oil leave it fairly vulnerable to global shifts. State investment funds like 1MDB and Khazanah Nasional Berhad (which Najib also chairs) were designed, in part, to give Malaysia additional economic buffer and allow it to use capital in a manner similar to neighboring Singapore. The success of such investment vehicles will become particularly important as China begins to focus on higher-value exports such as semi-conductors. Inversely, the economic woes have magnified the scandal. The commodities collapse, for example, has inflated 1MDB’s debts and shrunk the revenues available for UMNO to dole out to keep the coalition more firmly intact.

There is reason for optimism. Malaysia has relatively low debt and inflation, as well as a healthy resource base on which it can continue to build. Its membership in the Trans-Pacific Partnership would, at minimum, help the country diversify, gain an edge over rising regional competition, and position it at the center of global trade flows. So Malaysia’s economic slump alone may not be prolonged enough to sink the ruling party — UMNO survived even the 1997 Asian financial crisis. Nonetheless, Malaysia’s underlying strengths have given traction to the opposition’s assertion that graft and mismanagement must then be playing a singular role in dragging down the economy. This argument will gain strength if the slide continues.

More problematic over the long-term is the ongoing shift in Malaysia’s ethnic demographics. As in Singapore, Malaysia’s favorable investment climate has long relied on the country maintaining at least superficial political harmony. This is an innate challenge for a geographically fragmented country where the Bumiputera, or “Sons of the Soil,” have stood in contrast to the ethnic Chinese and South Asians, who wield economic influence disproportionate to their numbers. 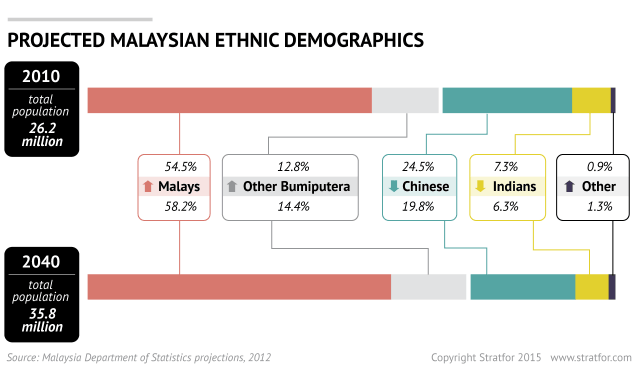 Malaysia’s political stability has revolved largely around the dominance of the UMNO-led coalitions that have ruled every year since independence in 1957. These coalitions have ensured high-level representation from all major ethnic groups and the farther-flung regions of Sarawak and Sabah on the island of Borneo, facilitating flows of patronage to all corners of society and preventing a repeat of the 1969 communal riots or revival of pre-independence racial strife. The effective one-party rule has generally enabled policy continuity and targeted infrastructure and industrial development, minimizing uncertainty for investors and giving Malaysia a leg up over regional rivals. This environment, combined with Malaysia’s resource abundance and fortuitous position as a trade hub in a high-growth region, fueled a steady economic rise and the growth of a robust middle class.

But the prospect of ethnic strife and resentment fueled by Malaysia’s affirmative action policies has continued to pose a risk to the country’s economic success. Mahathir, when still in power, tried unsuccessfully to peel back these policies, and it is unlikely that others will be able to do so. And throughout Southeast Asia, economic turmoil tends to lead to a push back against the ethnic Chinese populations. In Indonesia, for example, this has often led to violence. This issue is part of why Singapore is not still a part of the Malay Federation.

The ethnic balance underpinning Malaysia’s stability began to noticeably unravel in the 2008 general elections. Ethnic Chinese and Indian voters began to defect from the ruling coalition, upset with ossifying policies meant to cement the pre-eminence of Malays in political and economic life, as well as anti-minority rhetoric and occasional violence. Barisan Nasional lost 58 seats and its seemingly perpetual two-thirds majority. The shift became more pronounced in 2013, when a multi-ethnic opposition coalition won the popular vote. Today, the main Chinese party in the ruling coalition, the Malaysian Chinese Association, holds just seven seats (down from 31 in 2008) and no Cabinet posts. The main Indian party holds four.

Najib has increasingly sought to frame the 1MDB affair in ethnic terms. In this he has taken a cue from Mahathir, whose own rise was fueled by exploiting Malay and indigenous fears of, for example, “the Chinese tsunami.” UMNO has funded and helped organize the Malay nationalist “Red Shirt” movement, whose mass rally in September was narrowly prevented by police from storming a prominent ethnic Chinese business district in Kuala Lumpur. As political strategies go, this may appear exceedingly base, but it also reflects a recognition that Malaysia’s fundamental demographic makeup is changing, most notably among the Chinese. Since 1983, their share of Malaysia’s total population has dropped more than 8 percent, and birthrates among ethnic Chinese are by far the lowest of Malaysia’s main ethnic groups. For political purposes then, rather than wooing back minority voters, UMNO will increasingly work to secure its base and keep the opposition divided along ethnic lines.

This heralds a widening of ethnic divisions — punctuated by growing public unrest more common to Malaysia’s northern neighbors Myanmar and Thailand — that will challenge the core integrity of what is a particularly manufactured form of the modern nation-state. Lacking geographical or ethnic coherence, Malaysia’s solidarity has long stemmed from shrewd, inclusive policy making, with plentiful resource wealth available to grease away any frictions. A broad remaking of this political system — if it fails to preserve the ties binding Malaysia’s far-flung and disparate parts to the state — would thus prove unsustainable. To a degree, this risk will limit how far Najib and UMNO will be willing to push their ethnic advantage. But with the 1MDB scandal and the economic stresses drawing the ruling party into a protracted fight for survival, Malaysia is likely to slip further into an environment of new uncertainties.

2 thoughts on “Malaysia’s Politics of Survival by Elimination”