Malaysian Prime Minister Najib Razak is preparing for another world trip sometime this month, which will culminate in his annual grip-and-grin with other leaders at the September 25  opening of the United Nations General Assembly in New York, where he likes to stroll on the world stage as a moderate Muslim diplomat despite the fact that he has done nothing to quell rising ethnic and religious tensions between Malays and Chinese at home.

But first. he flies quietly to London on September 15, on the eve of Malaysia Day, for the annual London Arms Fair, the world’s biggest such exhibition, which gives global weapons manufacturers a chance to exhibit their newest and deadliest wares to potential buyers.

Flying in an opulent government-owned Airbus A320 outfitted at the direction of his wife, Rosmah Mansor, Najib leaves behind him a troubled nation and an incipient insurrection at the grassroots over massive corruption despite the fact that his vast hidden resources have seemingly bought the loyalty of United Malays National Organization cadres down to the district chief level.

Those resources, a support network of payments of up to RM1 million to party chiefs and jobs at government-linked companies and state offices, have insulated him within the party despite increasing rank-and-file outrage. Nonetheless, concern is percolating through the party that Najib’s refusal to go in the face of arguably the biggest scandal in Malaysian history generating voter outrage that will reduce UMNO to a smoking ruin in 2018, counteracting the party wheelhorses who continue to feed at Najib’s stable.

Will the US meet Najib again?

Najib, behave yourself, don’t take me for granted

Despite his turn on the world stage, he also faces problems with the United States, where the administration is faced with a series of questions in Kuala Lumpur including the Trans-Pacific Partnership, ASEAN economic integration and other issues over a man who has credibly been accused of receiving US$680 million from unknown but probably shady sources whom he refuses to name.

US President Barack Obama will have to decide whether to attend the annual ASEAN summit in Malaysia in November. Najib is this year’s host. The US cancelled an April meeting between Najib and Obama after the massive 1Malaysia Development Bhd. scandal began to emerge, in which the state-backed investment fund appears to have lost billions of US dollars funneled out of the fund to unknown destinations.

In addition, Al Jazeera aired an explosive 26-minute documentary on September 10 alleging that text messages retrieved in Australia from the mobile phone of Sirul Azhar Umar, convicted of killing Mongolian translator and party girl Altantuya Shaariibuu in 2006, show Sirul was attempting to blackmail Najib for millions of dollars to stay in Australia and “say nothing” about the case just before he was re-arrested. This way, according to Sirul’s messages: “I won’t bring down the PM.”

Nonetheless, Najib seems sufficiently confident that he can leave the country to his newly appointed Deputy Prime Minister Ahmad Zahid Hamidi, who is regarded as both supremely ambitious and a loose cannon. Najib has scheduled the UMNO general assembly for December 8-12, an indication he feels he can withstand any assaults that might be generated by the forces of former Prime Minister Mahathir Mohamad.

One longtime political analyst termed Najib a “dead man walking,” but said he is likely to keep on walking indefinitely. “We keep waking up every morning and he is still Prime Minister,” said another.  Dzulkifly Ahmad, the former information director for the now-split Parti Islam se-Malaysia, said in a telephone interview that his extensive surveying indicates the PM can probably survive to elections projected for March 2018.

Nonetheless, the PM had to cancel a planned ouster, rumored to have been ordered by his wife, of seven top UMNO officials including Muhyiddin Yassin, the party vice president whom he fired in August as Deputy Prime Minister, and Mukhriz Mahathir, the Chief Minister of Kedah and son of Mahathir, who has vowed to drive him from office and have him arrested if possible.

“He didn’t do it, based on the reality that the ‘unholy seven’ are seen as heroes by grassroots members,” said Imran Imtiaz Shah Yacob, a rebellious longtime UMNO member from the Mahathir wing of the party.

Zahid Hamidi, the Deputy Premier who replaced Muhyiddin, is increasingly driving the political agenda in ways that are both unhealthy for the country and disconcerting to cooler heads. 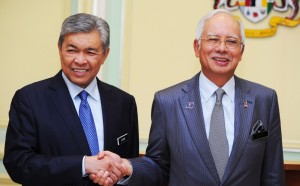 Zahid has unofficially loaned his support to a controversial “red shirt” rally by a self-styled coalition of militant ethic Malay groups headed by Jamal Mohd. Yunos, whose rhetoric has veered close to threats of violence at a time when the country’s always-delicate racial mix has become more precarious. The rally is supposedly in reaction to the Bersih 4.0 gathering of August 29, which drew tens of thousands of people protesting corruption and the crackdown on civil freedoms.

In addition to Zahid, the rally has received unofficial support from UMNO ministers including Domestic Trade, Cooperatives and Consumerism Minister Ismail Sabri Yaakob. Posters of the rally on social media imply violence, with one featuring a figure brandishing a kris, a Malay dagger, and the caption: “Tanah tumpahnya darahku” (I will die for this land).

Najib, however, will be well out of the country at the time. He is due to be joined in London by his cousin, Hishammuddin Hussein, the Defense Minister, and at least one top general.  The London arms bazaar is a child’s garden of delight for arms dealers, and Malaysia is said to be in the market for jets. Dassault, the French defense company, on September 1 submitted a bid to sell 18 Rafale multi-role fighter jets to Malaysia. 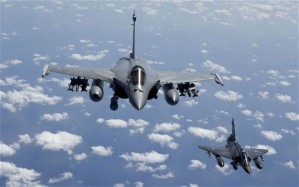 Dassault is believed to have edged out the BAE Systems Eurofighter, known as the Typhoon, although no official announcement has been made. Philippe Lubrano, a senior partner with Heli Partner Sdn Bhd., the Malaysian representative of Dassault, is said to have grown close personally to Najib. In the past, UMNO has profited enormously from defense kickbacks including submarines, jet fighters, patrol boats and other weaponry when Najib was defense minister.

Malaysia is also rumored to be expressing an interest – officially denied – in a French-built Mistral helicopter carrier built for the Russians before France cancelled a deal for two of the craft in 2014 following Russia’s continuing misadventures in Ukraine. Despite the denial, Reuters reported that Malaysia is in talks to buy one of the two.

The problem is that the craft is outfitted for deep northern-hemisphere operations in freezing weather. The decks, according to Pascal Najadi, a Moscow-based financial consultant, are fitted out with expensive de-icing gear to keep snow and frost at bay, hardly a problem on the equator. Also, according to defense publications, the Russians have demanded that the French strip out all armaments and electronic gear, basically leaving the carrier an empty shell, much like Scorpene submarines the Malaysians bought from the French in the 1990s and were delivered in the middle of the last decade.

There is also the question of why Malaysia would need an assault craft. According to defense publications, it is capable of transporting and deploying 16 helicopters, four landing barges, up to 70 vehicles including 13 tanks or a 40-strong tank battalion and 450 troops. It is hard to think of why Malaysia would need an expensive assault craft unless it can figure out somewhere to assault. None of the nearby countries looks likely.  More likely is the possible additional funds that a deal could earn for UMNO – or Najib — as has happened so often in the past.