In Bersih 4, one of the biggest demonstrations in Malaysia’s history, tens of thousands of protesters took to the streets of Kuala Lumpur on August 29 and 30 calling, among other things, for Prime Minister Najib Razak to resign for his handling of the economy and alleged scandals at a state investment fund. In a surprising development, the demonstrators were bolstered by two appearances by 90-year-old former leader Mahathir Mohamad, who is seeking to oust Najib, his one-time protégé. 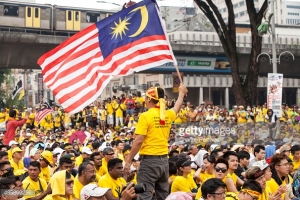 Much of the protesters’ ire was focused on news, which broke in July, that some $700 million had been deposited in the Prime Minister’s bank accounts shortly before the 2013 elections. Many speculate the money is linked to troubled state investment firm 1 Malaysia Development Berhad (1MDB). Najib is expected to survive the crisis prompted by the allegations—Malaysia’s Anti-Corruption commission has said the money was a donation from an unidentified Middle East benefactor—but it is proving to be a distraction at a time when the country is facing serious economic headwinds and preparing to host the ASEAN leaders’ meeting and East Asia Summit (EAS) in November. President Barack Obama and 16 other senior Asia-Pacific leaders are expected to attend. 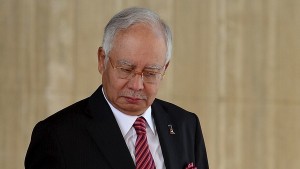 Najib plagued by scandals and corruption
As plunging commodity prices weaken Malaysia’s economy, Najib faces urgent calls to stem the loss of confidence amid allegations of financial irregularities at 1MDB. Foreign investors have pulled more than $3 billion out of the Malaysian stock market so far this year and the country’s currency has performed worse than any other in Asia.

The ongoing political crisis will make it more difficult for Malaysia to complete negotiations with its 11 partners in the Trans-Pacific Partnership (TPP) trade agreement, which includes the United States and Japan. Najib, who had joined the TPP in the hopes that it would help him press economic reform to boost longer-term growth, now appears to lack the political juice to push through compromises at home on such politically sensitive issues as government procurement and state-owned enterprises.

The ongoing scandal also appears to have distracted Kuala Lumpur and Washington from pressing ahead on the U.S.-Malaysia comprehensive partnership announced during Obama’s visit in April 2014. Najib and Obama played golf in Hawaii in January, but plans for Najib to visit the White House this spring were jettisoned after the Malaysian government threw opposition leader Anwar Ibrahim in prison on sodomy charges.

For the U.S. administration, the challenge in the run-up to Obama’s November trip is to find effective strategies to work with Malaysia on security initiatives such as the maritime tensions in the South China Sea and regional economic schemes such as the TPP and ASEAN economic integration. At the same time, Washington finds itself in a difficult spot, wanting to give Malaysia space for its domestic politics to play out but also compelled to express concern about the government’s increasingly reactive muzzling of critical voices in the press, civil society, and political opposition, including most prominently Anwar. On this last point, Malaysian authorities’ measured response to the weekend’s protests—a stark contrast with security forces’ use of tear gas and water cannons to disperse previous Bersih rallies—helped avoid international criticism that would have further strained the ability of the United States and Malaysia to engage productively on areas of cooperation.

Despite the anger over 1MDB, the size of the protests, and Mahathir’s involvement, Najib is expected to retain control of the government. He does not face the threat of a no-confidence vote in Parliament because his ruling coalition holds a significant majority. He also appears to retain outsize support among the leaders of his United Malays National Organization (UMNO) party, which has ruled Malaysia since independence in 1957, despite sniping from Mahathir and his supporters. As a warning to party dissidents, Najib fired his Deputy Prime Minister and the Attorney General in July and promoted four members of a parliamentary committee investigating 1MDB, thus making them ineligible to continue the investigation.

The opposition coalition lacks the heft to exploit the anger over 1MDB to challenge Najib even though it won 52 percent of the popular vote in the 2013 elections. The coalition has splintered along ethnic lines since the imprisonment of Anwar, the grouping’s charismatic leader. The mostly ethnic Chinese-based Democratic Action Party, along with Anwar’s People’s Justice Party, has split with the Pan-Malaysian Islamic Party (PAS) over the latter’s insistence on introducing Islamic law in areas it governs.

PAS decided not to participate in the protests, which resulted in virtually no rural Malay participation, although a small breakaway faction of PAS did support the rally. Roughly a quarter of the protesters were young ethnic Malays, but the majority were middle-class, urban ethnic Chinese, allowing UMNO leaders to conclude that most Malays were less upset about the continuing scandal surrounding 1MDB. A poll released by Merdeka Center found that 70 percent of Malays surveyed were opposed to the protest.

Shame on Najib and Accomplishes

At least for now, the majority of the ruling party’s leaders appear to be siding with Najib. The only scenario in which they would move against the prime minister would be if they determined he would be a liability in the next elections, due before 2018, much like they decided to oust Najib’s predecessor, Abdullah Badawi, in 2008. To this end, Najib remains far more concerned with the slowing economy. If the economic situation continues to deteriorate, it could undermine UMNO’s popularity even with its ethnic Malay base.

It is unlikely that Najib’s political crisis will dissipate before Kuala Lumpur hosts the summits in November. Najib and his foreign ministry demonstrated in early August that they could host an effective ASEAN Regional Forum that seriously addressed challenges in the South China Sea, despite the country’s political distractions. President Obama and Malaysia’s neighbors should assume that Najib will be able host a credible ASEAN Summit and East Asia Summit in November, with serious regional economic and security discussions, despite the Prime Minister’s preoccupation with his political survival.