These are the powerful words of prayer‎ usually said by the oppressed invoking God to mete out retribution to the oppressors. These are the words uttered by Malaysian Anti-Corruption Commission (MACC) Special Operations Director Bahri Mohd Zain three days ago when he was unable to tolerate the incessant attacks against the MACC including his own detention. 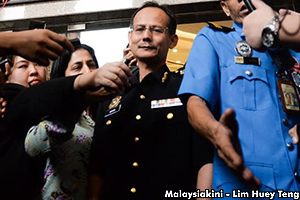 Within 24 hours of uttering those words, Bahri and MACC’s Strategic Communications Director Rohaizad Yaakub were transferred to the Prime Minister’s Department. It is like the Pharoah trying to prove God wrong, watch the movie Exodus if you are too busy to read the Quranic or Biblical account.

Yet those words by Bahri are so reminiscent of the words uttered by my outstanding and young lawyer friend Rosli Dahlan who said almost the same thing.

Eight years ago as Muslims were about to celebrate Hari Raya,  Rosli  was brutally arrested from his office by the Malaysian Anti- Corruption Commission and was brought to court the next day on what Rosli alleged is a fixed up charge against him and then Director of Commercial Crimes, Royal Malaysian Police Dato Ramli Yusuff in what is now infamously known as the Copgate affair.

After Rosli won his criminal case, he vowed that he would hunt down all those who had fixed him and hold them accountable and quoted the Islamic maxim for his actions – Am’r Maaruf Nahy Mungkar.

He had already won a series of legal suits against several mainstream media including against New Straits Times and the MACC which had to pay him damages of RM300,000. He also filed a RM48 million suit against the MACC, PDRM, just sacked Attorney General Gani Patail, retired IGP Musa Hassan, current MACC Chief Commissioner Abu Kassim, then MACC Director of Prosecution Nordin Hassan who is now a Judge and several others for malicious prosecution. The case is still on-going despite some of them are no longer in office.

Fast forward to today, in the current controversial 1MDB case, Gani Patail was removed‎ as Attorney-General and the MACC is in disarray with its No.1 and No.2 are nowhere to be seen although reported to be on leave.

I have been reporting on Rosli’s case for a while. Even from afar here in Phnom Penh Cambodia, I cannot help but see the similarities in the narrative of the 1MDB-MACC saga with the case of Rosli Dahlan. I ‎recall Rosli’s letter of 2010 where he made an impassioned appeal to Abu Kassim as the then MACC’s newly appointed Chief Commissioner:

“I implore you not to allow this sacred institution (MACC) to be used as tool of oppression and persecution in the guise of false prosecution against innocent citizens. Otherwise, you will one day see your own hands in the destruction of t‎his institution.”

Actually, the Malay word Rosli used to describe the MACC as “Institusi Keramat” has a more powerful meaning to show how it had been desecrated like the desecration of the Temple of Apollo in Troy by Achilles.

Those words have become prophetic looking at what has happened to Gani and the MACC today – what goes around comes around.‎ 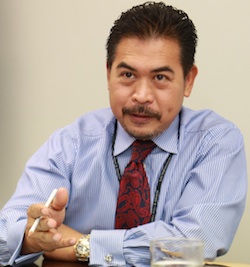 I think that it is God’s retribution to Gani Patail and the MACC, especially Abu Kassim for not standing up for the truth. I understand that Abu Kassim is on leave. That is unbelievable. What kind of leader is Abu who abandons his force that is under seige. ‎It is like a sentry abandoning his post when an intruder comes attacking. That is a dereliction of duty! This is a general abandoning his troops.

‎“Din, this is not the time to talk of revenge. The country is in turmoil. We must support the MACC from interference. We must support Gani from his unconstitutional removal. We must stand by principles and not personalities. This is to ensure we have the Rule of Law and not rule by law!”

When I asked what he meant by that, Rosli said that he was even willing to help the MACC officers who had been defamed, arrested, detained and transferred.

‎‎I thought I could provoke him further by saying that Might is Right and nothing can be done for so long as the perpetrators are in power. But Rosli reminded me that in his on-going suit against Gani, Abu Kassim and the MACC where Gani sought to strike out the suit, High Court Judge Justice Vazeer Alam Mydin Meera had written a damning judgment against Gani – ” The claim of absolute immunity is anathema to the modern notion of democracy and accountability and against the Rule of Law.”

Rosli then said resolutely to me: ” Din, that judgment is God’s way of helping this nation as it faces this crisis.‎ God works in mysterious ways.”

Rosli then explained that his suit against Gani and the others were in their personal capacity for abusing their positions and will survive regardless that Gani has been removed and Musa Hassan has retired.

I am so glad I had this chat with Rosli. I can now say to IGP Khalid, Prime Minister Najib Razak and the newly anointed and overzealous Deputy Prime Minister Zahid Hamidi and their sycophants that they too can be held accountable if they commit criminal acts while in office as criminal action has no limitation period. Do not think you can get away. God is watching you, even when no one is.

I say to them – Do not underestimate the prayer of the Oppressed!