COMMENT:  CIMB chairperson Nazir Abdul Razak is spot on in saying that Malaysians live in ‘dark times.’ Is this the diagnosis confirming the country as the new ‘sick man of Asia’? Corruption, which is more than just financial wrongdoings, includes the bastardisation of all public institutions in a country.

Nazir knows all about bastardisation, in particular the questionable implementation of national development plans, and probably of the country’s democracy.

The different arms of government are not independent or working vigorously to check one another against abuses of power and corruption.

The Executive Branch has total control over everything unlike in a proper democracy with separation of powers that ensures abuse of power is difficult.

The country appears stricken with a strange psychosis. The ‘dark political times’ are here because the politicians believe in their own spin ans lies. The medical doctors have a term for this condition: pseudologia fantastica, the fancy term for pathological liars, people who have the habit of compulsive lying and cheating.

It explains why they make public statements only to blame the media for misquoting them after they change their story when it suits them. Lying is the modus operandi of the corrupt.  “In this darkest of political times, we must remember to place the country and the rakyat first,” said Nazir.

Tell it to the Electoral Commission, the Police and the Judiciary, among other tainted offices, which are prone to siding with the powers-that-be and where stifling dissent is in the national interest.  Obeying political orders can be perilous as the killers of Altantuya Shaaribuu will testify. ‘Who gave the orders?’ is still the other unanswered question.

Where is the money?

Among the unsung heroes who have no monuments, we can’t overlook those Malaysians who have willingly and sacrificially endured years of ‘deprivation’ in ‘lost opportunities’ because of their race to accept affirmation policies however apparently unfair.

Why are politicians, present or past, among the richest Malaysians though they may not be named in Forbes magazine’s richest list? Today more and more Malaysians are not buying into the deception and it is a treacherous act to have a government programme like the Biro Tatanegara (BTN) teaches racism.

This dubious programme allegedly and evidently poisons the minds of young Malaysians of one race against another while the government funds a council to promote national unity. Sheer hypocrisy.

How sick is that?

The 1MDB presumably was meant to enrich the nation and attract foreign investments. But why were much-needed billion dollar funds taking a tax-holiday in Singapore and foreign banks? 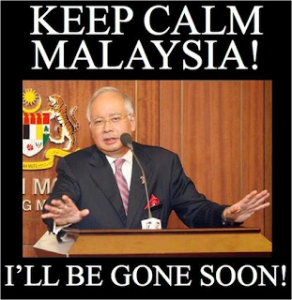 Not just Gone, but to Jail you Go

How has 1MDB helped development when all its profits seem to come from wheeling and dealing in real estate or buying and selling assets? There is no real industry, no development, only quick speculative profits. So much for the key performance index that does not seem to apply when the government plays guarantor.

For a government that legislated against property speculation why does it brag about its profits from buying and selling properties? No wonder Dr Mahathir Mohamad, Tony Pua and Rafizi Ramli think the sums don’t add. Others do too.

“Where is the money?” Mahathir demands. The Wall Street Journal says US$700 million (RM2.6 billion) found its way into Prime Minister Najib Abdul Razak’s bank account. Checkmate? Not quite, not yet. But you wonder if the leader will recover and still retain enough credibility to be effective. When a leader has to appeal to the people for sympathy then you know the government will soon be saying ‘Houston, we have a problem.’ And it is one not only of perception but reality.

Will Najib still retain the moral authority and respect of the people and his political peers to lead despite the millstones around his neck from the many personal scandals?

The 1MDB cannot be allowed to pass as just another political scandal. Attempts to get answers are not an alleged political conspiracy like Anwar Ibrahim’s Sodomy II trial. At its core is suspected criminal activity and there has to be a proper investigation to dispel the allegations and exonerate the suspected or convict the corrupt.

No one is above the law and no one is guilty until found guilty. But how do you get to the bottom of the suspicions, the allegations and the contradictions, if there is no proper inquiry into the much-publicised scandal? 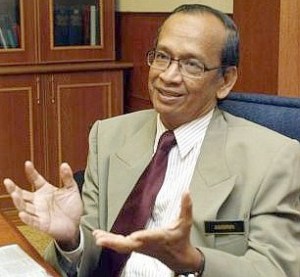 Hoping to be rewarded on retirement

Why is the Auditor-General taking so long to give us the audit report on 1MDB since it was ordered in March, more than three months ago? As a former auditor, I dare say, I would have completed the assignment and gone for a summer holiday in Europe and returned in all that time.

Three auditors were changed since the company’s inception in 2009 and that ought to have raised eyebrows and sounded the alarm.  Is anyone that naive to believe the audit trail of the vast sum of RM42 billion does not need to be investigated and that the country should move on with business as usual? That indeed would be the most sickening thought of all.

STEVE OH is the author of the novel ‘Tiger King of the Golden Jungle’ and composer of the musical of the same title. He believes in good governance and morally upright leaders.

23 thoughts on “Najib’s Malaysia: The New Sick Man of Asia”