Of RM52 billion  worth of shares , only RM2billion remain in Bumiputra hands 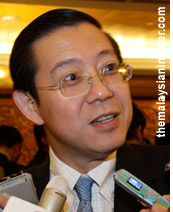 DAP secretary-general Lim Guan Eng wants the government to investigate why RM52 billion worth of shares in public listed companies allocated for Bumiputras under affirmative action policies were no longer in their hands.

He told reporters in Parliament today that the fact that the shares were no longer in the hands of Bumiputeras was an act of betrayal. The Penang Chief Minister suggested a Royal Commission be set up to investigate such leakages. He said that out of RM54 billion in shares allocated for Bumiputras only RM2 billion were still in their hands.

“According to a Bernama report, the Prime Minister had been quoted as saying that of the RM54 billion in shares allocated, only RM2 billion worth of shares were left in the hands of Bumiputras,” said Lim.

“There is a leakage of RM52 billion which is not in the hands of the Bumiputras. This is a betrayal. The government has to arrest and take action against the people who have hijacked the money,” he added.

When asked by a reporter whether Pakatan Rakyat had any ideas or leads as to who now held the shares, Lim smiled and claimed that PR knew who had control of them, and also why there was inaction from the part of the government.

“We in PR know who has the shares, it is held by the cronies of  Barisan Nasional, that’s why the government has not taken any action. If the government really cares, they need to send a message to show their seriousness in taking action.”

“The government should set up a Royal Commission on the Bumi equity. This is an admission from the Prime Minister himself,” asserted the Penang Chief Minister.

Lim’s initial response was towards a newspaper report on which Deputy Prime Minister Tan Sri Muhyiddin Yassin had commented on the distribution of wealth among Malaysians. “He is talking about the distribution of wealth among Malaysians, who has got what and who did not, the ones who have got nothing are the rakyat,” said Lim. The total Bumiputra equity currently stands at 19.4 per cent from its targeted 30 per cent some 19 years ago.

9 thoughts on “Where are RM52 billion worth of Bumi Shares? asks LG Eng”